I don’t often blog about the teaching element of my role as an academic but today I need to share my sense of pride in my final year students on a unit I developed during my tenure at Bournemouth University (BU) called Media Inequality.

It is a level 6 optional unit that students can select on degrees within the Corporate Marketing Communications (CMC) department in the Faculty of Media and Communication. Students take undergraduate degrees in advertising, public relations, marketing communications and politics.

I designed the unit to help students critically engage with historical and contemporary issues around race, ethnicity and culture and their relationship with power across the media and in communications practice.

In order to increase employability, I had a specific aim to help students develop cultural competencies that can be applied in a professional context to a range of communication industries.

I developed the unit content into three key areas with the aim of making explicit the incremental stages of the learning process: developing conceptual and theoretical knowledge as tools of critical analysis; understanding key contemporary topical issues and debates and applying both to the third area, communications practice.

I have been impressed with the deep level of engagement among the 21 students on the unit, which I believe is attributable both to a genuine interest in the subject and adopting a dialogical pedagogic approach to teaching, enabling the students to talk openly and freely in a relaxed atmosphere.

It has been a pleasure teaching this unit and the BBC Radio Solent show has been a bonus. Two students on this unit: Ray Taiwo (BA Public Relations) and Stacey Kelly-Maher (BA Marketing Communications) took part in interviews with BBC Radio Solent reporter Rebecca Romo on Thursday 13 October. The show aired on Monday 17 October during the Breakfast show on 96.1.

All the students on the unit contributed to the show by helping select the adverts to be featured and providing feedback on the script, which I prepared. They also became the audience during the recording of the show, helping to create the atmosphere of a live studio discussion.

The purpose of the radio show was to help students prepare for an upcoming video presentation assessment where they are required to discuss topical issues in the media relating to race ethnicity and culture.

I felt that by taking part in the development of the radio programme, students would have to go through the process of unpacking complex issues using specific examples, drawing on critical theories and articulating problems from an informed position. Ray and Stacey were very polished in their responses to Rebecca but I feel the whole class did extremely well and benefitted from the experience.

I’m glad that I had the opportunity to showcase what social justice pedagogy looks like and its potential for contributing to social change – hopefully this will encourage more lecturers to embed it into their teaching.

Students nominated me for a ‘You’re Brilliant’ award, which was presented to me in March 2017 – for Media Inequality and its contribution to social change! 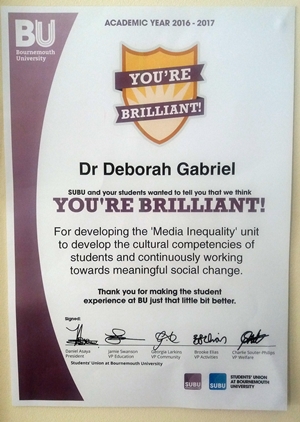