Naming African Caribbean people after the ship that transported them to Britain in 1948 distracts from the nation’s role in slavery, colonisation and systemic racism; while the celebratory tone of ‘Windrush Day’ is a distraction from the important mission of addressing past and present wrongs.

When I was approached by an ITN reporter last week and asked to participate in a news item about Windrush Day, I saw it as an opportunity to challenge a deceptive mechanism for perpetuating White supremacy by engaging the collusion of the very people who continue to be racially disadvantaged by White privilege.

A similar example of this is the British Honours System, which I critiqued in a BBC Breakfast Interview back in May 2012. I would not accept a British Empire medal, I said; as to do so would dishonour my ancestors who were kidnapped, enslaved, raped, murdered, tortured, had their land, property, assets, cultural identity and liberty stolen, and even after 400 years, the legacies of these atrocities persist. I would never collude in the romanticization and glorification of the British Empire – that remains my steadfast view. Given the image emblazoned on the Order of St Michael and St George medal so symbolic of White racism and supremacy – past and present – there is no reforming the British Honours system as there is no ‘honour’ in Empire.

This is the KCMG medal. The highest order given traditionally to diplomats and overseas personnel by royalty in the New Years Honours list. Zoom into the image and you’ll see how/why the UK is built on racism. Until these traditions etc are overhauled nothing will change... pic.twitter.com/iZXqpKed8f

Challenging the dominant ideologies disseminated in and through the media is important to my work through Black British Academics, which has always been centred on social justice, transformation and equity.

When I was emailed the interview questions on Thursday afternoon, one day before filming; it was apparent that the angle of the story had a specific purpose – to legitimize ‘Windrush Day’ and affirm a dominant narrative in which strategic and longstanding Black resistance to racial oppression is diluted, reduced to soundbites and conflated with recent protests in the present, while the historical context essential for a critical consciousness about White Supremacy is erased.

At the time of writing this reflection (Sunday morning, 21 June); I had no idea whether my interview would be included in the news segment, or if it was, what would be edited out. I decided to write this blog so that my perspective on the subject is clear.

I have reproduced my responses below from memory and from my notes.

Why is it so important that we mark Windrush Day as an important moment in the history of Modern Britain?

White British people are deeply inter-connected with the past and present experiences of Black Britons through the British Empire. By focusing only on their migration within that time period, it erases from public consciousness what happened to them before that arrival and since.

Before migrating to Britain, Black people from the Caribbean (originally from Africa) were enslaved, colonised, dehumanised, raped, murdered, had their land, property and cultural identity stolen and were oppressed socially, culturally, politically, and economically for over 400 years. No reparations were ever made for these atrocities. The poverty and indebtedness resulting from over 400 years of White supremacy preceded the migration of African Caribbean people to Britain. When they came here, they were constructed as inferior others and subjected to systemic racism in employment, education, health, and criminal justice.

Legitimising the term ‘Windrush’, leads to miseducation, rather than informed understanding.

Addendum: Language and terminology can perpetuate racial inequality by reinforcing White supremacy. The term Windrush is problematic because it dehumanises African Caribbean people by naming them after the British Empire ship instead of referring to them by their various ethnic groups: Africans, Jamaicans, Trinidadians etc.

Do you think there is enough emphasis on multicultural milestones like the arrival of the Empire Windrush in the way we teach history in schools and the way we talk about British history generally?

I don’t think it’s helpful to erase the histories of African Caribbean people through this romanticised idea of an arrival – but rather to understand how the damaging legacy of the British Empire is connected to their migration to Britain. I think it’s important to understand the role that institutionalised racism and White privilege has played in their experiences and it’s important to acknowledge and commemorate their contributions to this country – and to make reparation for the wrongs committed.

(Addendum). There are multiple experiences and perspectives that create a whole historical picture. However, maintaining White supremacy relies on the ‘Whitening’ and distorting of history to create a dominant narrative that normalises White identity and places it at the pinnacle of a racial hierarchy. Within these contrived versions of history, villains become heroes (and have statues erected in their honour) and victims are erased, demonised, problematized and criminalized. It’s also inaccurate to assert the falsehood that there was no Black presence in Britain before the mid twentieth century.

How important would it be to reclaim the anchor from that ship and have it serve as a monument?

A monument to what? The British Empire? I think it would be far more important while we are evaluating statues of people who owned slaves, praised Hitler, espoused racist ideologies and enriched themselves from slavery and colonisation – to commemorate African Caribbean people who migrated here and helped build Britain – despite being denied equal rights. It’s wrong to commemorate the ship instead of the people. There are more appropriate ways to honour the memories of African Caribbean people who came to Britain during and after the 1950s. As an example, In the city of Detroit, Michigan at Hart Plaza, there is a sculpture by Ed Dwight  called Gateway to Freedom,  which is a memorial to the slaves who won their freedom by travelling the Underground Railroad. The sculpture shows six fugitive slaves ready to board a boat to cross to Canada – but also features two Detroit residents who assisted them. Something similar to this, perhaps honouring African Caribbeans and their contributions to this country as ‘essential workers’, many of whom died shielding the nation from Covid-19, would be far more fitting.

Black Lives Matter has caused us as a nation to have a wider conversation about our history, where should the Windrush generation fit into that?

I think that the ingenuity and bravery of Alicia Garza, Opal Tometi and Patrice Khan-Cullors as the Co-Founders of the Black Lives Matter movement, which has evolved into a global movement for racial justice has sparked an important engagement with how the past is linked to present racial injustice. Where there is a connection between the two nations is that both White Americans and White Britons must understand their complicity in what happened to George Floyd because there is collusion in silence, in saying nothing and doing nothing while as an ethnic group you benefit from police protection while Black people are subjected to police oppression and brutality. That is one of many aspects of White privilege. There have been different ways of trying to explain White privilege. One example I heard recently on Oprah’s documentary on race in America was that if you are White you swim in the same direction as the current in a stream, but if you are Black you are always swimming against the tide and have to work much harder just to keep up. I prefer to emphasize the economic component of White privilege because White supremacy is all about maintaining economic power – because economic power funds political power.

Imagine a White person going to a cash machine to withdraw £10 and although they receive £10 the bank only debits their account for £6. The other £4 is debited to the accounts of Black people – this represents the wealth generated from slavery and colonisation that White people continue to benefit from while Black people experience racial disadvantage. This is both through the accumulative impact of White  wealth from slavery and colonisation that affords power – and through systemic racism where Black people are impeded in employment through access to jobs, access to career progression and through being paid less for the same or comparable jobs. That is the economic reality of White privilege.  The physical and mental impact and detriment to health and mortality is evident from the racial disparities laid bare by the Covid-19 pandemic.

Addendum:  I find it problematic that the mainstream media have been misrepresenting the Black Lives Matter movement in the wake of the murder of George Floyd in the US and reducing it to simplistic soundbites. As a Black-founded, Black led movement for racial justice it should be recognised as an evolutionary turn in the ongoing resistance of Black people against White supremacy – preceded by the Civil Rights Movement which was preceded by slave revolts and global resistance against slavery and colonisation on the African and Caribbean continents. This resistance has existed from the very onset of White supremacy. I don’t know who ‘we’ is in this question, since Black people have always had conversations about racism out of necessity. We know our history.

As the daughter of loving parents who migrated to Britain from Jamaica in the 1950s, I am a direct descendant of the generation who are the subject of this reflection. I believe that the most appropriate way to honour their memory is through truth, justice, reparation and equity. This means ensuring that history reflects the depth of their experiences and contributions and acknowledges the past and present wrongs committed in the name of the British Empire. I believe the best way to address White privilege is through reparation and equity. This necessitates repairing the damage inflicted on victims and their descendants and dismantling the systems that help maintain White supremacy. Some of the reparative work we must undertake ourselves in ways that do not reproduce White privilege, but challenge it. Equity means recognising the social, cultural, political and economic benefits that White privilege has brought people racialised as White through systemic racism. 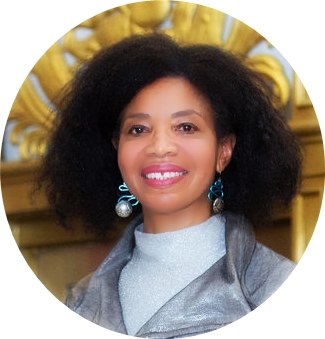 Equity means there has to be positive actions taken to redress the racial advantage of whiteness before equality can be achieved. While I recognise that the term ‘Windrush’ will be difficult to eradicate, I applaud efforts to deconstruct the complex and rich histories of African Caribbean people and their determination to resist oppression and subordination and their will to survive and thrive. A perfect example of this is the work of cultural activist Professor Shirley Thompson (pictured left) whose operatic work decolonises and diversifies the classical music genre and tells stories highlighting resistance. Examples of these are Sacred Mountain, The Woman Who Refused to Dance and  Memories in Mind . 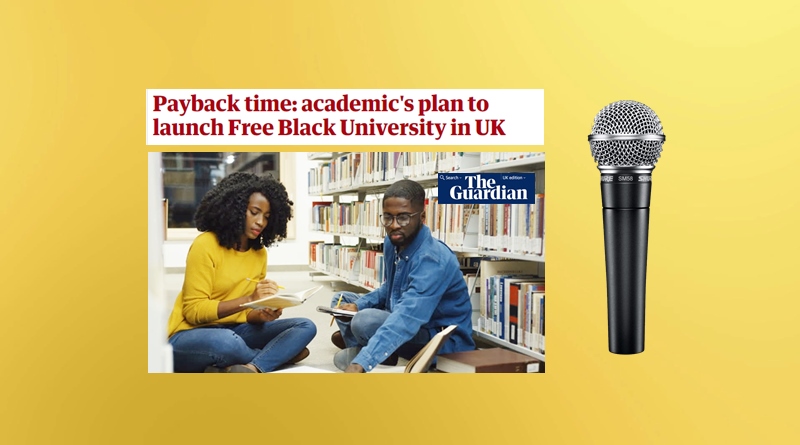 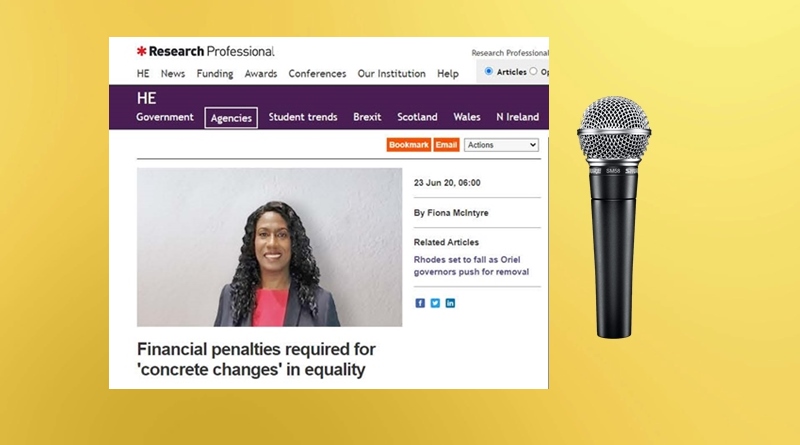 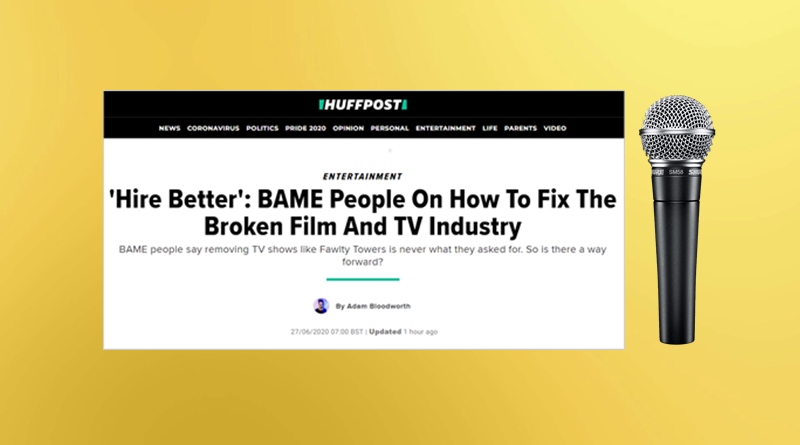